Light at the end of the Tunnel 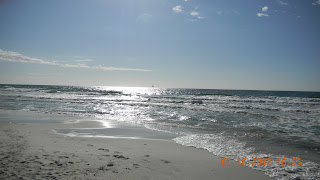 LIGHT AT END OF THE TUNNEL !!

This is truly the day Karen and I have been praying to see.

After all the trials and tribulation's my wife, family and myself have endured for 3 1/2 years. The checkup in Little Rock was "wonderful" as the Doc related. Doc also said, you will be off chemo as you know it, in 10 weeks. Only pills from now on. After 3 1/2 years of chemo every Monday can it be true, only 10 more sessions.
Hallelujah brother !!

Furthermore, I asked the doc what this meant for the overall prognosis of survival off the drugs combating this cancer. The answer, "you should have no problems for 8 to 10 years or longer. The data suggests you will live a long and fruitful life."


Well so much for the life policy everyone has been making sure is paid on time.

Truly praise God from whom ALL blessings flow!

Dr. W. said to continue doing my current regime and asked what that consisted of everyday. I answered," walk five miles, do 30 push-ups, play 18 holes of golf." Doc was astounded and said he cannot do that!
Anyway, Doc suggested I change nothing in my routine ...therefore, I will also continue to drink heavily as well !!


Thanks everyone for your thoughts and prayers.

Tonight is a Christian Moueix 2005 Pomerol, a bordeaux wine which is a merlot cabernet franc blend. Firm on the get go, balanced on the palate with a nice long finish. Vey nice indeed... I give it a 92 MAF. Very good for $18 bucks

Monday 7:00 am , Went to Chattanooga, dropped Karen and Lillie at chemo doctor for check up ... Jo was there to meet with them. Lillie is good to go for another month!

Rushed over to the eye doc for emergency eye check for an amoeba floating around in the lens. After eye dilation the eye doc said it was normal aging process not an amoeba!
10:30 ... went back to chemo doc, got my weekly dose of chemicals, and picked up Karen/Lillie. Dropped Lillie off in Valley Head and headed to Bham for pre-op appt at 3:30 with skin cancer Doc.

With all this said, the good Lord is still blocking all the fiery bullets coming our way, so he must have plans for me and mine.

" and he must needs go to Samaria."

My mom, "mother Mary, had the same technique performed last week on her leg and is doing great!

Karen, I and all our families appreciate the many thoughts and prayers from all !

It humbles us greatly.


Cheers from Valley Head
Karen and Mark
No comments:

Martin colony I host and caretake ......

ME
The great news first .... STILL IN REMISSION!!!!!! and Dr.W says the prognosis is for a long and fruitful life. Even though we do not live in San Francisco I can deal with the fruit part.

Karen and I were in Arkansas last week for the 6 month roundup test. Everything is green and go.

Also, saw the dermatologist as a routine and they (2) found two squamous cell carcinomas which were biopsed. They are cancer and now am scheduled for a MOHS  surgery on both. I hope they leave some of my face.
As September and football season approaches, I, being of good faith and sound mind, wore my Auburn national championship shirts throughout the hospital for 2 days. None the less, you can certainly appreciate the many random and off the cuff links remarks hurled my way. After all, I was 3 years old the last time Auburn won a national championship.

After many comments and serious discussion of the upcoming fall frenzy, one theme kept being asked of me.

What is the difference between Auburn and Alabama fans?
What a philosopical question to ponder ... in Little Rock Arkansas.
Several days of deep thought and sleepless nights consumed my brain on this question. Here is what I came up with:

Welll thats about enough of that rant as I'm sure someone is po out there in la la land.

KAREN
Karen is still fighting her knot on shoulder from surgery. However, not much if anything can be done about it.. so she just keeps on going about her duties ... no problem.

Lillie
Probably doing better than anyone, Lillie continues to amaze all of us. She now walks around doing flowers , yard stuff without any walker...cooks when she wants and does all her house chores by herself. Also drives to town and mailbox to do whatever. All this without being too bucky. Unbelievable!!


Cheers,
Mark and Ka
No comments: